Santiago Ramón y Cajal: The neuron as an independent entity and the foundations of structural neuroscience

Santiago Ramón y Cajal (1852–1934)(Fig. 1) was the most eminent Spanish scientist and the first Spaniard to receive a Nobel Prize from the Swedish Academy, shared with his competitor and adversary the Italian Camilo Golgi, in 1906. As a person, Cajal was a gentleman, respectful with dissidents, instructor of the illiterate, tolerant and combative, with a high sense of competitiveness and an infinite curiosity for the unknown. As a citizen, Cajal was a liberal conservative who knew how to live with the political orthodoxy of his time, showing his ideas without offending or jeopardizing his academic privileges. He was a member of the Masonic lodge at the age of 25, and was very active in social and political movements.

Cajal graduated in 1873 at Zaragoza University Medical School where he became anatomy teacher. Later on, he served as a medical officer in the Spanish Army, participating in an expedition to Cuba (1874–75), where he contracted malaria and tuberculosis. After health recovery, he received his Ph.D. at Madrid Univeristy in 1879 and became Director of the Zaragoza Museum, working at Zaragoza University until 1883, when he was appointed as Professor of Anatomy at Valencia University Medical School. He moved to Barcelona in 1887 and became Professor at Madrid University in 1892 and Director of the National Institute of Hygiene in 1899. At the present time, this institution is named “Cajal Institute”.

As a university professor, Cajal was innovative in some respects. He was a man of thick speech and dense oratory. His writings reflect a complex personality accustomed to the struggle for survival.

As a scientist, Cajal was a genius; perhaps one of the brightest geniuses born from the Spanish culture, at a time in history when Europe was building the foundations of neurosciences.

The nineteenth and early twentieth centuries, when the figure of Cajal emerges as one of the brightest men of his time, represent a florid period in which the foundations of modern neurosciences were gestated. 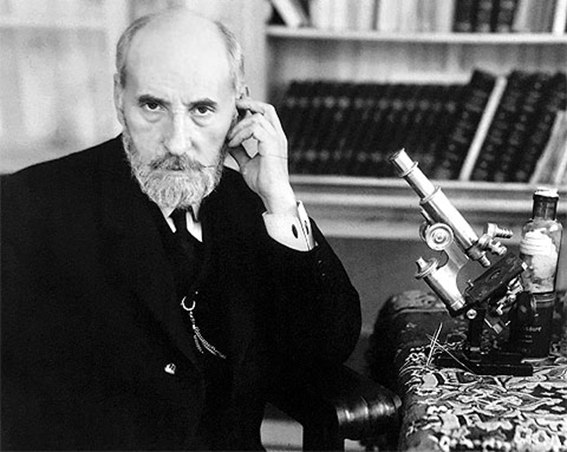 The first half of the twentieth century was also very productive in terms of scientific development. The two World Wars exerted a negative influence on the progress of science.

In the last years of his life, Cajal lived the effects of a convulsive politics that culminated in 1936 (two years after his death) in the Spanish civil war that physically and psychologically demolished the country.
Meanwhile, the locomotive of science ran its course around the world and Cajal was part of the milestones that adorn the successes of the first quarter of the century. In 1900, Sigmund Freud publishes “The Interpretation of Dreams”, Charles Scott Sherrington states that cerebellum is head ganglion of the proprioceptive system, and M. Lewandowsky coins the term «blood-brain barrier» (Bluthirnschranke); in 1902, Julius Bernstein proposes the membrane theory for cells, the physiologist Ida Hyde is the first woman elected to the American Physiological Society, and Oskar Vogt and Cecile Vogt coin the term «neurophysiology»; in 1903, Ivan Petrovich Pavlov coins the term “conditioned reflex”, and Alfred Walter Campbell studies the cytoarchitecture of anthropoid cerebral cortex; in 1904, Procaine is synthesized, and Thomas Elliott suggests that autonomic nerves may release chemical transmitters; in 1905, Alfred Binet and Theodore Simon have their first intelligence test, John Newport Langley coins the phrase «parasympathetic nervous system», and Austrian ophthalmologist Eduard Zinn performs the first successful human corneal transplant; in 1906, when Golgi and Cajal received the Nobel Prize by their contrinutions to the structure of the central nervous system, Alois Alzheimer describes presenile degeneration, and Sir Charles Scott Sherrington publishes “The Integrative Action of the Nervous System” that describes the synapse and motor cortex; in 1907, Ross Granville Harrison describes tissue culture methods, and John Newport Langley introduces the concept of receptor molecules; in 1908, Vladimir Bekhterew describes the superior nucleus of the vestibular nerve (Bekhterew’s nucleus), Victor Alexander Haden Horsley and Robert Henry Clarke design an stereotaxic instrument, Willem Einthoven makes string galvanometer recordings from the vagus nerve, and Oberga introduces the cisterna puncture, a method to access the cerebrospinal fluid through the cistena magna; in 1909, Tetrodotoxin is isolated from the pufferfish by Yoshizumi Tahara, Harvey Cushing is the first to electrically stimulate human sensory cortex, Korbinian Brodmann describes 52 discrete cortical areas, and Karl Jaspers publishes “General Mental Illness”; in 1910, Emil Kraepelin names “Alzheimer’s disease”; in 1911, Allvar Gullstrand is awarded Nobel Prize for Optics of the eye, Eugen Bleuler coins the term “schizophrenia”, and George Barger and Henry Dale discover norepinephrine (noradrenaline); in 1912, the original formula for the intelligence quotient (IQ) was developed by William Stern, and Phenobarbital brought to market; in 1913, when Cajal develops gold chloride-mercury stain to show astrocytes, Edwin Ellen Goldmann finds blood brain barrier impermeable to large molecules, Edgar Douglas Adrian publishes work on all-or-none principle in nerve, and Walter Samuel Hunter devises delayed-response test; in 1914, Robert Barany received Nobel Prize for his contribution in the elucidation of the vestibular apparatus, and Sir Henry H. Dale isolates acetylcholine; in 1915, J.G. Dusser De Barenne describes the activity of brain after strychnine application, and Aspirin becomes available without a prescription; in 1916, Richard Henneberg coins the term “cataplexy”, George Guillain, Jean Alexander Barre and Andre Strohl describe an acute inflammatory demyelinating polyneuropathy (Guillain-Barre Syndrome), and Shinobu Ishihara publishes a set of plates to test color vision; in 1918, Walter E. Dandy introduces the ventriculography; in 1919, Cecile Vogt describes over 200 cortical areas, Walter E. Dandy introduces the air encephalography, Gordon Morgan Holmes localizes vision to striate area, Pio del Rio Hortega divides neuroglia into microglia and oligodendroglia, and Konstantin Tretiakoff describes changes in the substatia nigra in people with Parkinson’s disease; in 1920, the Society of Neurological Surgeons is founded, Henry Head publishes “Studies in Neurology”, Stephen Walter Ranson demonstrates connections between the hypothalamus and pituitary, and John B. Watson and Rosalie Rayner publish experiments about classical conditioning of fear; in 1921, Otto Loewi publishes work on Vagusstoff, Hermann Rorschach develops the inkblot test, John Augustus Larsen and Leonard Keeler develop the polygraph, and del Rio Hortega describes microglia; in 1922, the Army Medical Library is established (Library of the Surgeon General’s Office); in 1923, Capgras syndrome is described by Joseph Capgras; in 1924, Charles Scott Sherrington discovers the stretch reflex; in 1925, C. von Economo and G.N. Koskinas revise Brodmann’s cortical nomenclature of the cerebral cortex; in 1926, Percival Bailey and Harvey Cushing publish a paper describing more the 2,000 neuroepithelial neoplasms; in 1927, Chester William Darrow studies the galvanic skin reflex in US, and J. Wagner-Jauregg receives Nobel Prize for the treatment of dementia paralyses; in 1928, Philip Bard suggests that the neural mechanism of rage is in the diencephalon, Walter Rudolph Hess reports «affective responses» to hypothalamic stimulation, Edgar Douglas Adrian publishes “The Basis of Sensation”, and John Fulton publishes his observations of the sounds of blood flowing over the human visual cortex; in 1929, Hans Berger publishes his findings about the first human electroencephalogram, Karl Lashley defines «equipotentiality» and «mass action», Joseph Erlanger and Herbert Spencer Gasser publish work on the correlation of nerve fiber size and function, and Walter B. Cannon coins the term “homeostasis”; in 1930, John Carew Eccles shows the central inhibition of flexor reflexes; in 1931, Ulf Svante von Euler and J.H. Gaddum discover substance P; in 1932, Max Knoll and Ernst Ruska invent the electron microscope, Jan Friedrich Tonnies develops multichannel ink-writing EEG machine, Edgar Douglas Adrian and Charles S. Sherrington share Nobel Prize for their work on the function of neurons, Jan Friedrich Toennies and Brian Matthews design the differential amplifier, and Smith, Kline and French introduce the first amphetamine, Benzedrine; in 1931, Ralph Waldo Gerard describes the first experimental evoked potentials; in 1934, when Cajal dies, S. Howard Bartley performs studies on cortical visual evoked potentials in rabbits. 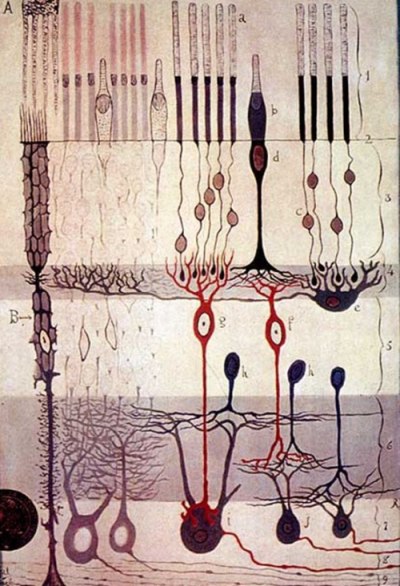 This was the intellectual and scientific environment in which Cajal moved throughout his prolific life, with limitations imposed by the difficulties of the time in communications and access to knowledge.
With few technical and economic resources, Cajal was able to uncover one of the best-kept secrets by nature until then: the structure of the nervous system and the neuron, as the structural queen of the brain, as an independent entity, as the lady of the sensory perception, psychomotricity and all the higher activities of the central nervous system. Cajal created the theory of neuron as an independent entity, giving support to what Heinrich Waldeyer had coined as “the neuron theory”, against the “reticular theory” postulated by Gerlach and Golgi. 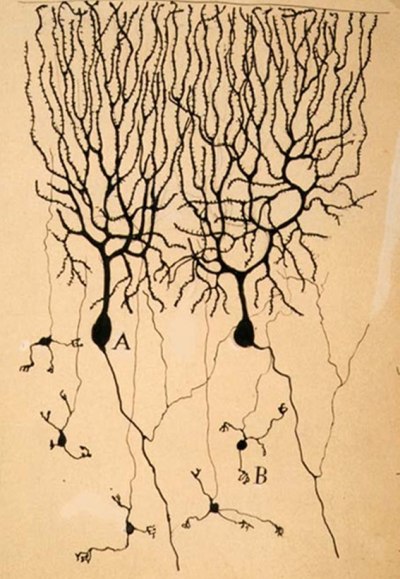 He depicted the fine structure of the central and peripheral nervous system and discovered a new type of cell (the interstitial cell of Cajal), a cell found interleaved among neurons embedded within the smooth muscles lining the gut, acting as a pacemaker of slow waves of muscle contraction in the gastrointestinal tract.
Cajal was an exceptional draftsman. With a privileged visual acuity and a pencil, he left beautiful images for the history of neurosciences. Typical examples of his geniality are the drawings of the structure of the mammalian retina (1900)(Fig. 2), Purkinje cells and granule cells from pigeon cerebellum (1899)(Fig. 3) or the neural circuitry of the rodent hippocampus, published in his book in French entitled “Histologie du Système Nerveux de l’Homme et des Vertébrés” (1911, Paris)(Fig. 4).
Another of his great human qualities was a powerful scientific leadership that allowed him to create a school of scientific thought, continued by his distinguished disciples the neuroscientists Pedro Ramón y Cajal (1854-1950), Pío del Río-Hortega (1882-1945), Fernando de Castro (1896-1967) and Rafael Lorente de Nó (1902-1990). 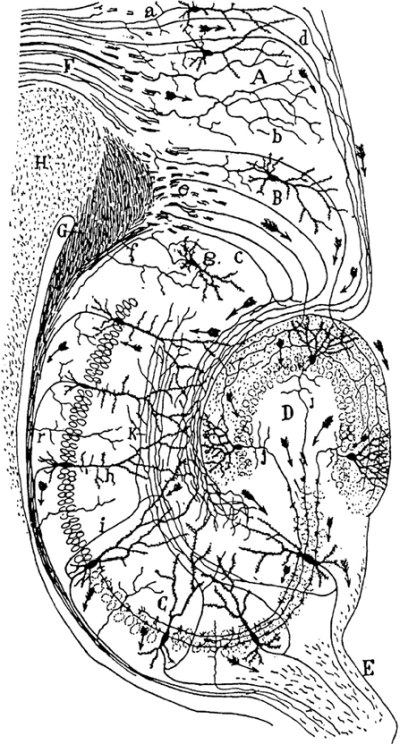